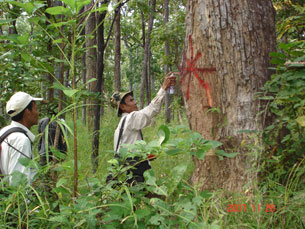 Stung Treng is one of the remote provinces situated in the northeast part of Cambodia about 481 km from Phnom Penh. The province border Lao, PDR to the North, Ratanakiri province to the East, Mondulkiri province to the South, Preash Vishear and Kampong Thom province to the West. Stung Treng province covers an area of 11,092 km2 and this total territory has been divided into nine categories of land use pattern. The current forest land covers an area of 928,000 ha (83.66%), the rice field, the agricultural land, the residential lands, and green industrial land concession, the flour land concession, the roads, the rivers and stream and fallow land (provincial department of planning). According to the indication the statistics above, which is shown that this province richest of natural resources particularly natural forest that is the sources of income generation and living. It consists of 17,608 families with the total population of 91,795 of which 47,236 women (provincial planning department). After Cambodia has been finished civil war forestry resources in this province has faced in the destruction gradually due to increasing the over-exploitation of logging companies and granting land to private companies. The local people has been loss of access to the natural forest such as collecting non-timber forest products, local communities are not allow to go inside of forest and land concession for agriculture cultivation within their existing paddy field, and the livelihoods of local people has been threaten by losing of land, forest, and other sources of living. The heavy pressure from degradation of forestry resources and landlessness, unsustainable of forestry resources management, the local communities decided to ask CEPA to assist them in the both technical and financial aid to development community based forestry resources management for ensuring the equitable, and sustainable of forestry resources use and management in the province.