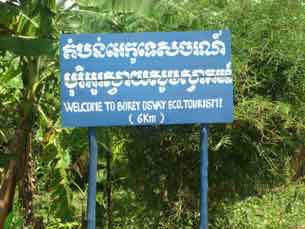 To increase community’s awareness on conservation and generate additional income for people living in Veurn Sien Village, O’Svay Commune through community-based pro-poor eco-tourism developmenOSvay Commune, situated within the Ramsar Site, has been identified as a potential eco-tourism destination due to its rich natural resources – forest, fish and wildlife. The commune is approximately 60 kilometers from Stung Treng town and located along the Mekong River at the Khmer-Lao border. It is composed of five villages namely Koh Phnov, OSvay, ORun, Veurn Sien, and Koh Hib with a total population of 2,764 majority of whom speak Lao. It is accessible either by road or river. Established in 1964 by King Sihanouk, families from different provinces were encouraged to settle in the area to defend the Cambodian border from neighboring Laos giving the commune its own cultural mix. People in Veurn Sean village are composed of an ethnic minority group formerly from Rattana Kiri who continue to practice their traditional culture, music and religion. Majority of the people in OSvay rely on farming, fishing and collection of non-timber forest products (NTFPs) as their main source of income. Logging and land concessions, illegal logging and fishing activities, over exploitation and unsustainable use to resources have caused these resources to decline at a dramatic rate. To allow the community access and equal rights to the resources, two development projects are currently being implemented in the area – Community Forestry and Fishery – to empower the community to manage and use the resources through sustainable activities. Guardian spirit festival is one of festivals in community that the most people usually do every year, when they celebrate it, they need boiling chickens, candle, incense and other offers. This festival is celebrated in order to indicate their belief that every year, if the people have not celebrated it, villagers will have infection in their whole village. Osvay is a place where situated next to the Lao border, so there are many villages that have been affected by the language, so most of people there, speak Laotian but except Osvay villagers, they speak Khmer as family language. For Koh Phnov village is an island which is next to Osvay village, the people who live there. Bauld, S. & Yin, S. (2006) An Ecotourism Assessment of the Steung Treng Ramsar Site, Steung Treng Province, Cambodia. IUCN Mekong River Basin Wetland Biodiversity Conservation and Sustainable Use Programme (MWBP), Ministry of Environment, Royal Government of Cambodia.