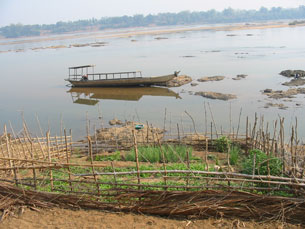 In the era of globalization countries in the Mekong region has tried to catching up of economic development with the developed countries in over the world. In each country in this region accelerate economic growth without thinking environmental and social security. The Mekong region there is more than 65 million people who are living in it and most of them depend on natural resources for subsistence.Due to speed up of economic development, the upper stream countries have many development projects such as hydropower, water diversion schemes, navigation , and other development infrastructure projects that caused several problems damage of millions local people livelihood, and as well as river eco-system, fishery resources and lack of fresh water in downstream countries. Cambodia is poorest country in downstream, which is 85% of people are living at the rural areas; particularly depend on the rivers and it resources. Cambodia people have suffered from negative impacts from multi purpose of dam development in upper stream countries of the Mekong River such as China, Thailand, Lao, PDR, and Vietnam. Due to the gap between rich and poor countries, rich and poor people, some countries and most of poor people were excluded from scene of development. For instance presently, millions people of Cambodia has no access to information and public participation in the development programs especially indigenous group and poor people. These activities repeat again and again, which have caused many consequences to local communities such as damaged livelihood, poor health, disaggregate of solidarity, loss of culture, etc, that make them hopeless in their life. The aim of this project is to highlight the impacts of national and international policies and projects, both in public and private sector, on the livelihoods of the rural poor and on biodiversity, and to assist the affected communities in their struggle for recognition of their economic, social and culture rights and as well as promote access to information and public participation.